This is a different kind of post, a film post as opposed to a camera post. I got two films back today and both have a tale to tell, so tell it I will.

Firstly, I bought a junk APS camera for $1, which I haven’t written about yet, and I could not get the film door open. I tried yanking it, sweet-talking it, but nope. Then I put a battery in it and low, there was a film inside. So, the camera did a very good job of protecting it. BUT, did the camera work? I hadn’t tested it yet. Was the film ok? maybe not as I tried to yank open the door. In the end, there were too many unknowns so I pressed the rewind button and put in another film. The film I retrieved was a Fuji Nexia 800, quite rare these days with the ever dwindling supply of APS.

I decided to use the found film in a known camera. Now, here lies the problem…all APS film is unknown so to speak, as it is all expired. So, why not use this film in the unknown camera. Because I would not know it if was the camera or the film. Minolta Vectis to the rescue. I knew this camera worked very well and it accepted film that had been rewound midroll. When I put the film in though, it did not accept it. The junk camera I found the film in had set the code on the film to 3, ready to process. Here are the cassette codes.

Then I remembered the old, use a pencil in a tape cassette to rewind it, trick. Maybe not a pencil, but a screwdriver?? I rewound the cassette so the code showed a 2, and put it back in the Minolta. Goodness me, if it didn’t go and load 🙂 I never thought that would work.

So off I go on a walk around a river in Tokyo. And finally, I got a cd back with viable images. The film was great, perfect even…an absolute steal for $1.

The second film I got back was a Lomochrome Purple. The last time I used a lomochrome film, I forgot to ask for a cd and my scanner could not handle it at all. I was very disappointed with the results. This time I put the purple in the Olympus Mju I had just tried and remembered the CD. Holy crap, there was a huge difference in quality. I have changed my mind about the film and I am so in love with the camera. This week I had the pleasure to try a very expensive camera and I was impressed. This Olympus was $3 in a junk bin, and I think it is better. Sure it doesn’t have some of the fancy settings, but wowee, it is sharp. Here is the test roll I took around Akihabara. 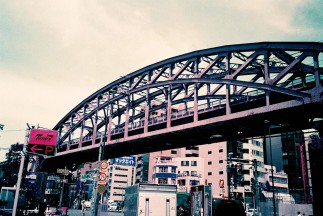 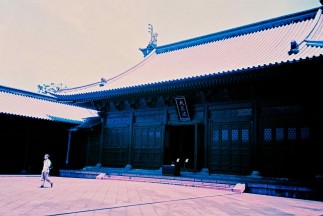 The result from the Olympus makes me think that I will probably sell all the other point and shoots I have…apart from the one other Olympus Mju I have.