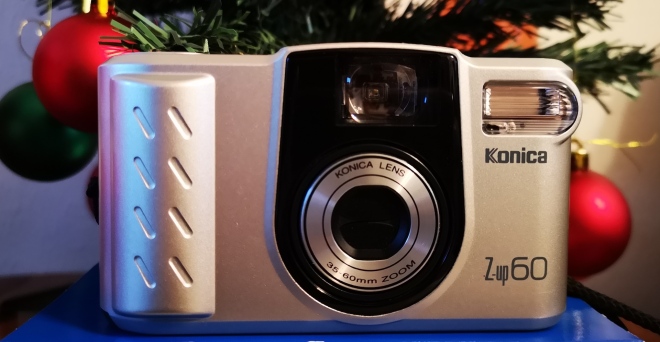 My Konica Kristmas kapers kontinue this week with a failed attempt to use my Genba. I took it out of its storage place and proceeded to put in some batteries. On checking the shutter and select buttons I found they had disintegrated beyond use. The “pushing” bit of the shutter simply fell out.

The mechanisms still worked, as I found out with an unwound paperclip used as a prodder. This was hardly a practical solution and certainly was not waterproof. BUT, could I fashion some other kind of replacement? As always I tried. I glued part of the said paperclip to extend the broken prong then wrapped a spring from a pen around it to give it some, well, spring. That turned out to be a little short so I tried again with a stone shutter thingy that I had previously made.

Brilliant…nope, didn’t work. There seems to be a theme happening with my Konicas. This is turning into a bit of a Konica Katastrophe.

So to bring some sense of victory to my project I looked on Facebook marketplace for a Konica film camera. I wanted something that was working and close to my location. This is the lucky camera that popped up.

I have previously tried the Z-up 80 and was impressed by that. This version of the z-up line seemed a lot more basic. It lacked any of the fancy features of the 80.

This example was in immaculate condition and I was assured it would work. It came with the original receipt, box, manual and case. The receipt says it was bought in Meadowhall in 2001. As I was still waiting for a film to be returned for the FC, I decided to load this one with a Kentmere 400 which I could process myself. That way I could post this piece quickly.

Then I kept it in my bag for a few days, mainly taking it on a trip to get my iPad fixed and to a park near the shop…hence the iPhone covered tree in the sample photos below.

I found the results of this camera from 1998 to be a bit hit and miss. When I selected the mountain or flower/macro symbol, the focusing was spot on. But when I left it on auto, the focusing was sometimes off. If you check the technical details here you will see that the maximum shutter speed is 1/15th. The day was quite dull during some of the walk, plus I was also under the trees. This might have force the camera to choose the slowest speed. The largest aperture is f5.8 so this does seem likely. BUT, the photos look out of focus rather than show the effects of camera shake. It is odd that the christmas lights and the fish shop night shots are in focus?? Maybe when the flash is forced on the shutter speed is increased??

Anyway, the flash on this camera is automatic, unless you choose the mountain setting as this turns it off. Why would you need a flash for landscapes I suppose? Alternatively, the flash always comes on for the flower/macro setting. Whatever setting you choose is cancelled as soon as the shutter is activated…which is a bit annoying as it means you have to reset the camera every time when you are doing a series of macro shots.

I have to say, even when the focusing was out, the exposure was spot on. I didn’t find any other reviews of this camera. The sample shots on the lomography page all seem in focus. Maybe it is my example, maybe it is the camera and I am the only one to post the out of focus shots. It would take another film to find out but my Konica Kristmas is coming to an end soon. Just a few more sleeps to the big day.

How about you? If you would like to try this camera let me know in the comments or send me a message via the contact form… If you are not located on the moon I will konsider sending it to you as a gift. Then you too can have a Happy Konica Kristmas…or at least a Very Merry Konica Valentines Day??

Update: This camera has now been sent to a photography student 🙂