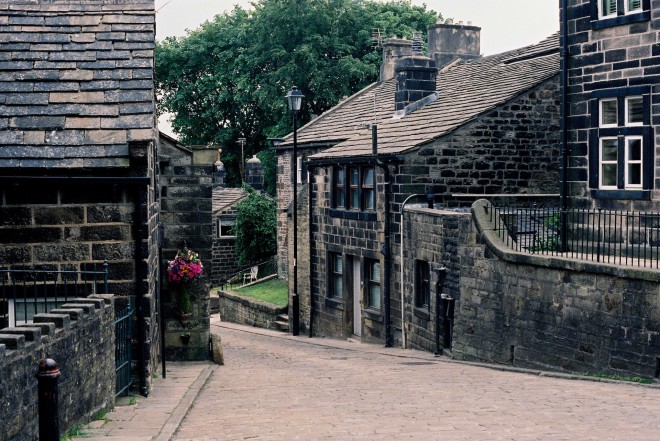 I was given this camera by a friend and could hardly believe it. I had initially tried one in Japan but had to leave it there when I returned to the UK. I was disappointed as it was one of the first cameras I had “fixed”. Then my friend handed me her SRT101 and I went, “wow, really”.

I am not sure she really meant it, but I was so enthusiastic that she decided to follow through with the gifting. Of course, she is welcome to reclaim the camera at any point, friendship is more important.

I still have lots of RAR films left and I wanted to try a new development recipe. So I loaded a short roll in this camera and took it to Hebden Bridge and Heptonstall. The new recipe worked well; even though the results are grainy, they are less so than before. For this roll, I didn’t use a stand method with Rodinal but agitated every 1 minute. That seemed to improve the results.

The guy with the long beard was our guide for the day, you can see his Instagram feed here. I was happy to see the man with the hat as I have bumped into him before. The last time, he was sitting outside the now-closed museum. This time he was close to Sylvia Plath’s grave counting the number of visitors. He was still very interesting to chat with.

Once I had finished the short roll I decided to use another experimental roll. I had bought a couple of supposedly C41 rolls from Hong Kong. They were cheap but short, only 18 exposures. But with colour film being hard to come by, I thought I would try it out.

When the two rolls arrived, they turned out to be ECN-2, not C41. The remjet layer was still clearly on the film as was evident by the black base colour and it was written all over the box, but not on the listing photo. Not one to give up, I wrote to a few places and they all said no they didn’t develop ECN-2…but then Photo Hippo said they did, though they didn’t state the price. I sent them this roll and a day later I received the email saying the download link was ready and it only cost £6.50. Wow, quick and cheap!!

Here are the results from that short roll.

Well, what a surprise. They aren’t bad at all. Definitely better than a random expired roll which might be twice the price. It is a little cold, but not overly so in my opinion. It captured the red of the postbox very well, I find red can sometimes get blown out with some films. The short roll might be good to use in half-frame cameras if you want to make it more economical. I got this roll for £6.60 so for 36 exposures it would be double that and then two times the processing cost, so maybe not economical at all.

And now I am back to the old problem, I have too many cameras. I have too many SLRs for sure and I need to sort through those as I can’t possibly use them all and they need to be used. This one is a keeper though….they are all keepers really…I need a bigger house.