This was one of the 3 cameras I bought in Hong Kong. This cute little thing was sitting on a shelf, in a small shop, at the very top of Sim City. I had given up buying a camera while on holiday, they all seemed overpriced. This one was just $20HK, even if it was overpriced, it was still a good price for a holiday treat. Inside the shop, a man was taking apart an Olympus Trip. I watched him a while then I went back to the shelf. I looked at the other cameras and decided to buy two. I will talk about the other one in another post. 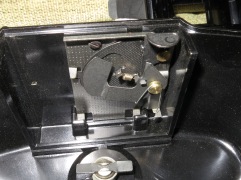 This one is a 127mm camera. It is my first 127 camera, but not my first bakelite. I had read how to load 35mm film onto the cassette and really wanted to try that. When I asked to buy the camera the owner said he also had some film. Perfect, I could use that and use the roll to try it with 35mm. As soon as I got the camera home I asked my friend to go for a walk…oh and pose a bit please 🙂

The camera was produced around 1954 in England. It is a rebadged Brownie 127 made for export to America. There is absolutely nothing to this camera, point, shoot, fire. It has one shutter speed, 1/50th and one aperture, f14. Which means you need to use it on a nice, sunny day which I did with the first film. Here are the result of the film I got with the camera.

Basically, stand very still and do not shoot into the sun. If you follow those rules then the Rera Pan 100 film will be fine for the eight shots you get.

Next, I taped the lead from a cassette of Fujifilm 100 to the backing paper, put both in a dark bag and rolled the film onto the paper. I made sure the new roll was tight before taking out of the bag and putting it in the Starlet. This time shooting I also tried a multi-exposure because you can with this camera.

After you shoot the 8 measly shots you have to reload it into the original cassette if you want to get it developed in a lab. Here in Japan, I made sure I loaded it back into a Fuji cassette 🙂 As you can see they come out like panoramic. I tried to scan the sprockets, but whenever I did the image became washed out.

I actually liked using the camera. It looks cool and is very light to carry. Only having 8 shots means if you use it regularly you really have to think about what you are doing. The two similar shots on the first roll was due to the fact I couldn’t remember if I had taken the shot or not…that is something to be aware of too. On the whole, the shots are quite sharp.

Keep or sell: I left it in Japan with a friend as it wasn’t worth anything monetarily. It might look cool on a shelf, though.