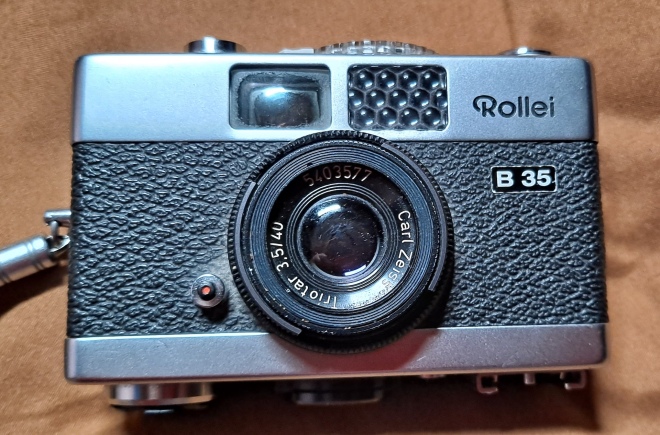 I wrote this post on my iPad while watching the Jubilee Trooping of the colour. It was such a lovely day, I would usually be outside taking photos, but we won’t ever see a platinum jubilee again. Hopefully, we will get a diamond one. I will pop into town later to check out the flags and festivities.

There is one charity shop in my home town that sells film cameras. Nothing they offer is usually great, the best items seem to be put on eBay. What they do have is often interesting. On the occasion I last visited, I saw this camera. I was quite surprised to see it, surely this should be on eBay as they can fetch quite high prices.

I checked it over and it looked very clean, bar the dint on the top. The light meter reacted as it should and due to the selenium cell, there was no battery compartment to check. And the price, £9.99! There must be a catch? I couldn’t find one, so I bought it. Now, the last time I tried an example of this camera, it wasn’t my favourite. Of course, I am always willing to change my opinion and to play with a camera.

I loaded a roll of Rollei APX 400 film and headed to Leeds. The camera handled like a dream, smooth and efficient, and the light meter giving appropriate readings. This time I loved how it would fit easily into a pocket. Of course, there was a catch, I just hadn’t found it yet…but I was about to.

When I finished the film and with the camera working so well, I decided to rewind the finished film and load a colour one. Someone commented on an Instagram post that the lens really showed off colour film beautifully. So I clicked the button and started to rewind the film. Nothing happened. It was far too loose. Not loose, like the lever was falling off, but loose as in…no tension. How could that be? I would have to wait until I got home to retrieve the film in a dark bag.

Once the film was out, I looked carefully at the camera again. The lever was set firmly in the camera, it wasn’t loose…there was just no shaft attached, nothing actually touching the film cassette to enable the rewind action.

Bugger. I looked online for a spare part or a for-parts camera. Erm, no. Everything was over £50 minimum bid. So what to do?

First, develop the film to see if it did actually work and was worth the effort. Here are some of the results from that film.

Yeap, and beautifully. So what to do? Luckily, I have a habit of buying junk cameras and stripping them for parts. Surely I had a shaft in there somewhere. Yes! But did it fit?

YES…almost. Once glued on, I could successfully rewind the test film.

All was not perfect though, it was very stiff. To advance the film I had to forward the film to make it loose first. I didn’t think that was a big issue so I put in a roll of Fuji 200 colour and went to Worcester for the Analogue Spotlight event and then to Wollaton Hall. The stiffness was a bigger issue than I thought and the resultant film showed evidence of overlapping which the first one did not.

I am not giving up though as you can see it works perfectly bar the shaft issue. The next step is to either remove and sand the shaft to get a better fit, keep my eye out for a spare part, or return it to the no-rewinding state. At this point, I really wish I had a 3D printer!

Very Quick Update: The sanding worked. I sanded the middle of the spokes and the edges of the cog just slightly and the test roll moved much more freely. It is still a tiny bit stiff, but not enough to cause any further issues. 🙂