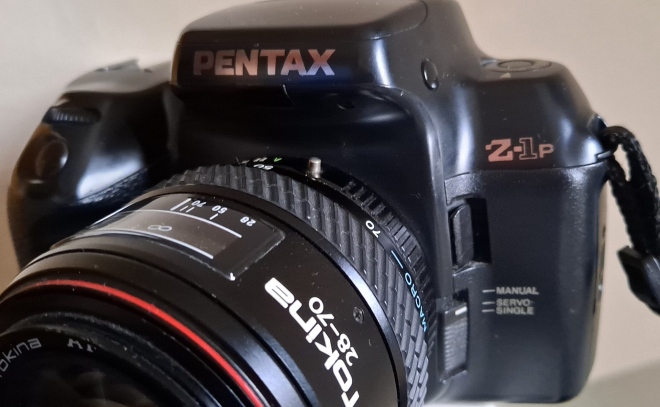 I was given this camera by a friend to try out and eventually sell. I will be at a camera fair in Boston Spa on October 24th 2021 in order to sell some of my collection. Any sales will go towards more film or an electric bike…depending on what sells.

This was given to me without a lens but I had a pentax fit automatic lens in my collect, just in case I acquired another camera to try. Tadaaa!!

The Z-1p was introduced in 1994 and was classed as a top end camera. It is certainly heavier and more solid than other automatic Pentax cameras I have tried. It has a heap of features, most of which I will never use. This website and the one previously linked to has all the information you might ever need.

Though you can just pick this camera up, load it, and use it…having a look through the manual is probably important for this model.

When given the camera, there was a half used Agfa 200 film inside. I decided to use up the rest of the film in Stanley Park, Blackpool. If they didn’t come out, well, they were just shots of birds.

But they did. The autofocus might have been a little slow but it was spot on.

For the next film I decided to use the panoramic setting as I have recently been inspired by a book I received, Chaos by Josef Koudelka. The photographs featured were all shot in panoramic format and this camera had that setting.

Unfortunately, the guide lines for panoramic shots were missing due to the owner swapping the original focusing screen for a split screen version. He did this in order to use a vintage, manual lens and rarely, if ever, used the panoramic feature. It meant I would have to guess the framing.

I decided to use up another expired film I found in a donated camera, Taking it on a walk around Hull. The film was in terrible condition and I struggled to get anything from the developed negs.

Even though the quaility of the shots are shocking, there was something I liked. I decided to try another, slightly fresher film. It was a Kodak Plus X of an unknown date. This one was aquired from Northern Film lab. It had been stored correctly and I had confidence in it being ok. I took it on a walk around Leeds and kept it on the panoramic setting apart from one shot at the very end.

Then I developed it in Pyro-510. I have to say, this developer is amazing. It has worked everytime with great results. For this film I added a bit of time as I thought it might be underexposed due to the weather and unknown expiration date. It turned out, that was a good decision.

I love the results!! I think I might do a few more of these, maybe even make a zine/book to show them off.

Many other people seem to love this camera going by the reviews in this forum. Though I didn’t really connected to it, I fully admit it was just me and nothing to do with the camera. I simple didn’t “get” the hyper modes and kept the camera on aperture priority. The manual is 130 pages long and I just couldn’t be bothered to study it to get the most out of the camera. I like to be able to pick up a camera and just use it, in the end that is what I did.

The last set of shots slightly changed my mind about the camera, every one came out even without me feeling confident in its use. It is a great camera, but I am lucky enough to have alternatives.

As mentioned before, this camera will be for sale along with others at the Boston Spa camera fair on Sunday 24th October. This is my first time there and there will be other sellers. Hopefully I will sell more cameras than I buy.