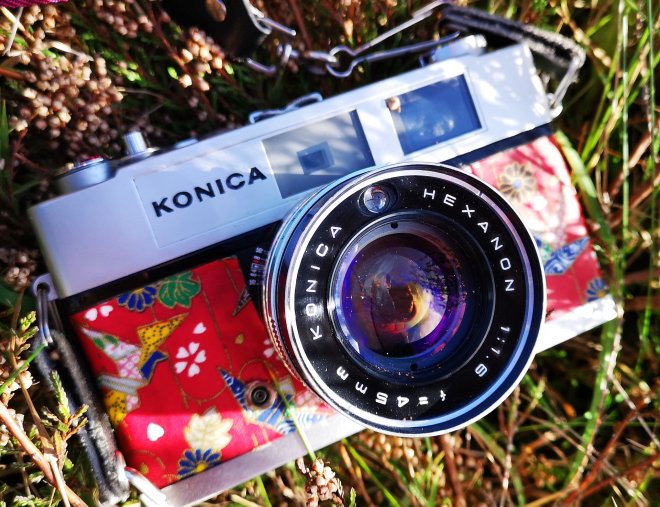 Time for another Konica post. This time it is for a camera I already owned and have used before, the Konica Auto S1.6. Saying that I have used before is an exaggeration. I used it a couple of times only, then got carried away with other cameras and forgot all about it. Well, a little bit anyway. It turns out I first used that camera at a fertility festival and it has phallic shaped statue photos. So every now and then a bot or something reports the post for indecent photos. I am not taking it down though…it’s culture. Anyway, here is the camera.

Just over a year ago I decided to use it again. My belief is you have to keep using your cameras on rotation or they might stop working altogether, seize up, plus it is fun. So I loaded it up and took it out for a walk. About a hundred meters from my house the neck strap slid through the eyelets and the camera crashed to the ground. 😦

I looked it over and I couldn’t see much damaged, just a couple of scratches to the plastic around the viewfinder. Phew, Lucky. So I reattached the strap…with plenty of testing and carried on with my walk.

I managed to take two shots before I found the camera had not escaped unscathed. The film was not advancing as it should. I took it home and rewound the film in a dark bag. Then I loaded a spare film to watch what happened. There is a part inside the spool that was spinning on advance, but the main spool wasn’t turning causing the film to jam in the take up compartment. I tried loading it a few times and the same thing happened each time. Bugger.

I didn’t feel comfortable taking the camera apart myself, plus I was visiting a more technically minded friend soon (before Covid times). I took this camera along and asked, pretty please, if he would take a look at it. He agreed. I said not to worry about the skin as I could replace it with something else…though I would be disappointed if the truth be told.

Roll on a year or so and my friend said he hadn’t been able to fix it. I decided to sell a couple of cameras and get it CLAd. The camera was posted back to me and just to be sure it really didn’t work, I loaded a film…it didn’t jam.

I asked my friend again, are you sure you didn’t fix it? He said, he couldn’t get it to work at all. Strange. I used a dummy film and used it to the end and rewound it, reloaded it and did it again. No jamming. I checked all the shutter speeds, they were fine. I checked all the apertures, fine too. I put a battery in and tried the light meter, fine. The only thing that was an issue was the wind-on lever was a bit loose but all in all it seemed to be working as it should.

Time to test with a fresh roll of HP5 and a much better strap. Once home again I developed the film.

It really was working. The photos seem fine, the meter was obviously working on auto as I mainly used that setting, with a few ones on manual to compare the results.

While using the camera I could see the rangefinder wasn’t aligning properly. That wasn’t an issue for shots at infinity, but with the bicycle wheel shot you can see clearly the carpet is focused. I actually tried to focus on the wheel. Well bugger, so close but no cigar. Of course I wasn’t going to leave it at that, I did a little research and found this video.

I decided to take off the top as I could clean the insides at the same time. To be fair the viewfinder was pretty clean and I could clearly see the second image. But here is a handy video, what have I got to lose? I had though it was broken before.

I couldn’t get the black rangefinder cover off due to a stripped screw, but there was access to the horizontal and vertical alignment screws. So I left that cover on in order to avoid unnecessary damage.

I then focused the camera on a house in the distance, the infinity alignment was off. I turned the screws as per the instructions in the video until infinity focusing was perfectly aligned in the viewfinder. Then I carefully put it all back together. I then loaded a Fuji 100 film and went for another walk, trying to capture images that would demonstrate the focusing at a variety of distances.

Here are the results.

With the last few shots I added a flash, just because I haven’t ever done so. I didn’t know the sync speed so put it on 1/60th at that point.

My friend said he didn’t fix it, but he did. Well done him, he is cleverer than he thinks. Plus I managed to fix the focusing myself. AND to top it all off the wind on lever is now perfect, the result of taking the top cover off I suppose. What a super result!

If you want to know more about the history of Konica and this camera, check out Mike Eckman’s post here.

Oh…as a bonus piece of information, while doing this I finished the book “Magnum Contact Sheets“. I wondered how to make a contact sheet using my files and a Mac. I found an app called “Contact Page Lite“. It worked beautifully for me. I tried it with the first film posted here.

Here are the results, this is one jpg. The app makes a PDF, I converted it in Preview so I could upload it here.

I don’t know when I will use it again, but still…good to know.