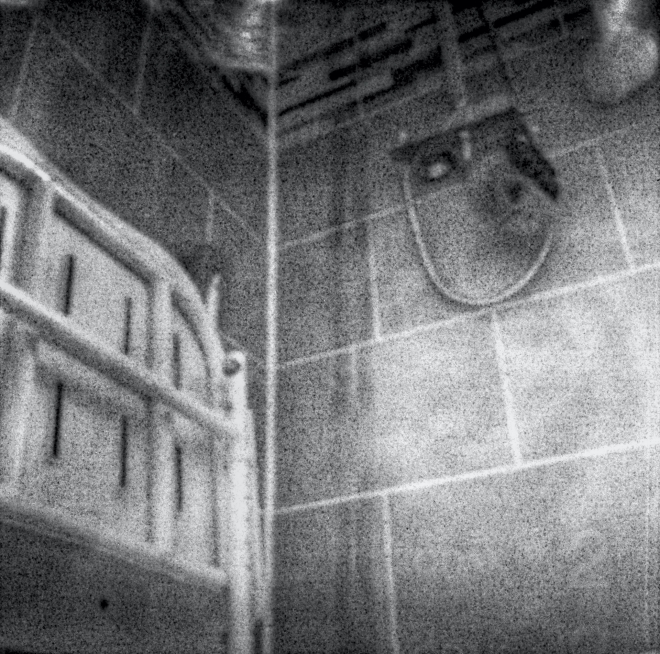 Hello fellow covidians, today I decided to try a few pinhole photos. World Pinhole Day is at the end of this month, so why not spend some of this time to return to that format. Just before the “events” I sold my Ondu pinhole camera in order to get a new lens for my digital camera. I haven’t missed it at all, but now I didn’t own a pinhole camera…or did I??

Oh Yeah, the Diana F+ has a pinhole setting. Also, I could use some of the regular lenses to finish the film. I decided to use an old TMax film, that has been lying around for a while.

The pinhole of the Diana has a diameter of about f150. My phone light meter said that would be about a 5 minute exposure inside and about 30 seconds outside as it was cloudy. Roughly. Throughout the process the main issue I had was getting the shutter stopper thingy in the right place.

I wandered around my house and garden, as the government has requested and took a few photos.

The film looks pink as it needed longer in the fix, or so a knowledgeable friend told me.

These are the results from my Diana Day.

As always I am a bit disappointed with the pinhole results. I expected the shots to be much wider and sharper. I think this camera might be on my “to sell” list when all this is over. For the remaining shots I tried a few different settings.

The 55mm with the flash.

The 55mm without the flash.

Yeah, I think I might sell this set-up. The film didn’t really help matters. The combination really isn’t my favourite. Hey, covid quiz…can you find the film numbers and kodak impressions from the paper on the photos?

Anyway, I much prefer Holga cameras to Lomography. I might sell this and use the money for a 120 Holga.

5 thoughts on “Return to the Diana F+”