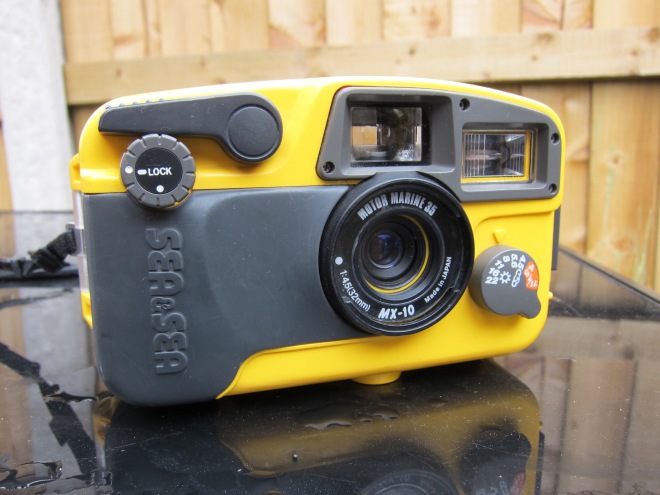 This is the second one of these I have tried recently, the other being the Motormarine II. This one came with a whole heap of stuff, including a lens that actually fit the other camera. As you can see in the photos, the battery compartment is much better sealed. On this version, it is inside the main compartment. This means there is only one O-ring with the possibility of failure.

I found very little about this camera on the net but you can find the manual here. The main bulk of hits were for people selling it. I did think, by looking at it, that is camera came after the one I linked to before and on the Sea & Sea website I found the evidence I was right. This one came out in 1992, 3 years after the Motormarine II bit before the II EX. I thought this because of the location of the battery compartment. Also, I initially thought the camera had autofocusing, but it is fixed focus. It also has a fixed shutter speed of 1/100th, but the aperture goes from f4.5-f22. The aperture is selected by the photographer through a dial on the front of the camera. You can find more technical details here. That site states that the minimum focus distance is 2.5m, which is quite far away. There are close up lenses that can be attached and my pack came with those, though they are only for underwater photography.

Apart from the aperture dial, this is a very sturdy point and shoot. When using it there is a red LED in the viewfinder if there is not enough light. When that lights you can change the aperture or turn on the flash.

Here is my test roll.

I can’t believe people were playing football in this weather. My sister was in a 10 mile race too. I walked around taking photos, much safer. Anyway, considering the conditions the camera didn’t do too badly, but it is not as good as some genba heavy duty cameras like this and this. Though, those cameras are not waterproof enough to go diving with.

Though this was the first Sea & Sea I found that worked without fault I decided to sell it. Just for the fact I have too many cameras.