Gosh, that is a long title, but it does what it says on the tin. I tried, for the very last time, another cassette of originals film in a Polaroid camera. This time I attached a frog tongue to the sun600.

I ordered one online and had to have it sent to my home in the UK and forwarded to Japan. Gosh, I am dedicated. When hearing my request my Dad asked, “Is there something I should know?” I explained, but really he needs to see this post.

When it finally arrived I watched this video, which basically says, “use the force”. Kind of appropriate for the moment.

The frog tongue is a little longer than the original tongue. That means it does not flip back, thus scratching the film. It also covers the polaroid for the first stages of development.

I read the instructions for the film very carefully. Do not shake, do not expose to light in the first 6 minutes….6 minutes, holy moly!!! and a few other small details which completely takes away all the fun.

Anyway, I did as I was told. As this was going to be awkward I just went to my local park. I took a book and a timer.

I tested the tongue with an old cassette and pre-exposed polaroids…which gave me an idea for a joke. As the cassette contains the battery and will continue to work quite a while after the polaroids have been used, you can take shots of things and reinsert them to the cassette like I did to test the tongue function. Then pretend to take new ones. The old polaroids will come out and confuse the subject. i.e. pre-take some animal photos and then shoot people saying the camera will find your spirit guide or something.

Anyway, I took a shot. Set my timer for 6 minutes and left the polaroid with the tongue covering the exposed part.  I place the camera in shade and put my coat over it for good measure. I resisted the temptation to look at the result or even touch the camera for the full 6 minutes, I read my book. When the timer went off I carefully lifted the tongue, which was much easier with the added length, thus avoiding scratching the film. I place it carefully upside down on a bench and repeat the whole procedure…8 shots x 6 minutes each = I am already peeved.

Once the new shot was protected I looked at the previous shot.

This is one of the shots after 6 minutes and there is still a scratch at the top, I wasn’t as careful as I thought. I decided not to bother going anywhere else or making much effort with the subject matter.

These are in succession left to right of development stages.

And here are all the 8 shots from the cassette after leaving them to develop for a week. Yes, a week….just to be sure. 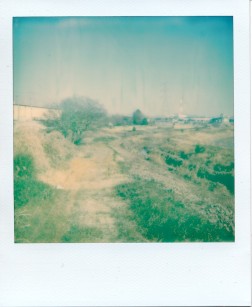 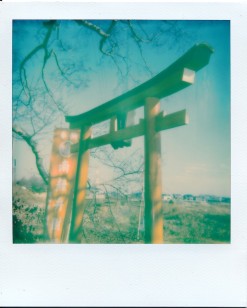 What a complete pile of crap.

Keep or sell: I don’t know if I can even be bothered to put it in the garbage…maybe HULK SMASH!!