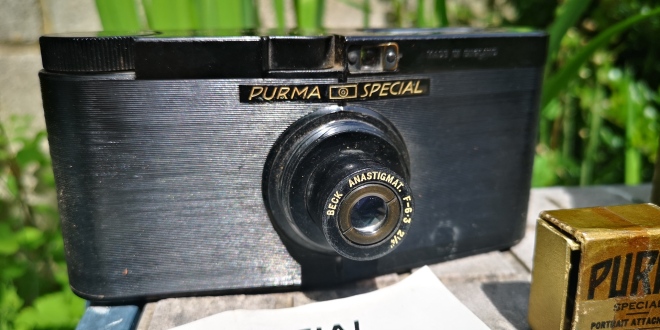 I decided to look for another 127 camera seeing as I had the FCK127 when up popped this blog post on Casual Photophile. Then this post appeared up on another blog I read. That was it, I wanted Purma Special and luckily I am in England so they are fairly cheap.

I put a minimum bid on a camera which stuck and it came whizzing my way less than a week later.

The first post I linked to was written by Mike Eckman. He also wrote a post on his own site with a few more details.

With the previous links you can garner all the technical details you would need or like. I can’t add anything, so I won’t but I will leave this quote here to remind you and me of the shutter.

I am amazed the fast setting was quite so fast, I mean this camera is from the 1930s. To be clear, a bakelite camera from England made between the late 1930s and early 1950s. Having a top speed of 1/450th is impressive. In any of the positions the shutter makes quite a thunk, I didn’t think I could avoid camera shake. Then I realised, the thunk happens at the end of the movement. That means the shake comes when the shutter is closed…so maybe everything would be ok?? The brass weight inside the camera is ingenious. I found an exposure guide on this website which was useful to carry around.

For my first roll I loaded some Fomapan 200 cut to size and headed to Holmfirth. The results were a little underexposed due to the weather and my lack of speed expectation. Before I used the camera I tried an empty roll inside to see where the numbers lined up. By cutting the film I assumed the numbers would not line up. In the end they were hard to see in the two windows due to their positioning. So I worked out that three half turns of the winder would be enough to move the film forward. I wrote it on the winder to remind myself.

I tried using the numbers half way through, but I reverted to counting the turns. In the end I got 14 shots rather than the 16 usually achieved. They are 4×4 as the shutter design was intended for this size, as in, the orientation affected the speed not the size.

The one half exposed shot is where I left my finger too close to the shutter cocking lever. On activation my finger stopped the movement and left the shutter open. So always keep your fingers out of the way.

The developed film showed that two, maybe two and a half turns would have been better and yielded more shots.

After that roll, I did some research and I found there were a few accessories available. They may have initially come with the camera, but I had none and that wouldn’t do. So I did a search and managed to find someone selling a box and accessories with no camera, perfect. There were even green film window replacements…which will never be used.

In that selection, there were two number one yellow filters so I sent one to the author of the 35MMC post as a thanks.

With the yellow filter on, I headed to Chester to try the camera again.

You can’t put two filters on at the same time, so the close up of my father utilises the 32inch filter, the rest have a yellow one on. Also, I am still having an issue with the FCK scratching the film. This might be a Fomapan issue so I will try another type of film at some point.

What a cracking camera…made of bakelite so I better not drop it. My example has lasted 80 years, but now it is in my possession…who knows when I will drop it, but I am sure I will. Maybe I should get a case? Another quick search and extremely cheap purchase brought me this.

To be honest, the case was an absolute pain to get on and off. It is a very tight fit. I can see why it was in such good condition, the original owner probably never kept it on.

Finally, a friend sent me a link to a microscope for sale on eBay. Why?? Well, the lens attachments that were being sold with the microscope said Purma Special on them. I wrote to the seller and asked if they would consider splitting the lot and they did.

So here is my Purma Special set.

The case with the filters is genius. Whoever made it used some cork glued inside a kind of glasses case. The whole set of filters were not inside, I am still missing at least three. I don’t have the red, blue or green, but now I have added the orange number 2 and the other 2 zone focus filters to the ones I originally had….wait a minute, didn’t I some zone focus lenses???

These were in the initial accessory box I received…bugger…now I might have to get the Purma Plus.