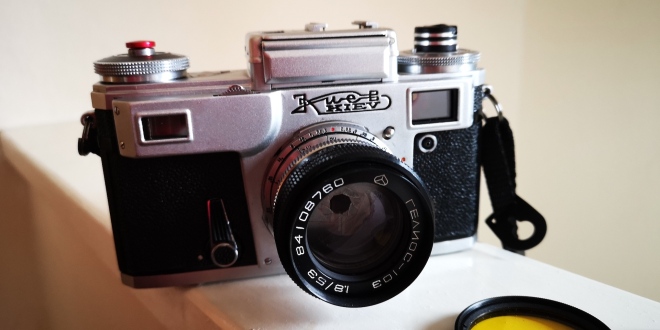 I absolutely loved my Kiev 4, but unfortunately it just never worked really well. The film advance was a bit dodgy and sometimes overlapped the shots or jammed. It wasn’t a major issue, it was intermittent. What it really needed was a cla and that would cost at least £100 in postage and labour. I couldn’t afford it.

Then I noticed a seller on ebay in the UK with a few Kievs and he mentioned in the description that he serviced the cameras he was selling. So I wrote to him and asked what he charged. Alas, he didn’t service other people’s Kievs as it was just a hobby. So I changed tack…I have a nice Kiev, with a working light meter and super lens, would he be willing to sell me one of his working Kievs with a lovely discount in exchange for mine? What has he got to lose really? The worst case scenario would be that he gets a sale and some Kiev parts…though I knew my Kiev was better than for parts. He said yes and I got my Kiev before I even had a chance to post his, there’s honesty for you. Once he did receive it, he agreed it was too nice to use for parts and is enjoying giving it a new lease of life. I love this kind of deal, much like the Lomo LC-A I swapped recently. Everyone is happy.

So here is my newer Kiev 4.

But did my new Kiev work? Well, my last one had a film jam issue, but look at the photos. This version has a much more stable take-up spool. It has a plate at the bottom to stop it moving or falling out. The last one had the wrong spool inside and I had to get a replacement. This is a much better design.

Plus, my original Kiev was from 1978, this replacement is from 1984 so slightly newer. The lens is also different, this time a Helios 53mm f1.8 which seems to be the standard for the later versions of the camera. Generally the later models were not build to same standard as the earlier ones, the Helios doesn’t have the same reputation as the Jupiter. But as my original one was dodgy anyway I can’t really compare it. All I could do was shove a film in and play.

To go along with the swap theme of the post, I put in a film that I had swapped for a lens. It was a lens I wasn’t using and had an alternative so I swapped it for a few rolls of film, including 2 rolls of expired Kodak BW400CN. Then I trundled along to Dearne Valley Country Park, before the local and national lockdown of Barnsley.

The camera seemed much smoother than the original, easier to wind. The rangefinder was easier to see too, despite my non-claw hold. I had high hopes for the film I sent off to Photo Hippo. A shout out to the Hippo, they are still working in a reduced capacity if you need any films developed. I got my transfer link in about a week.

Here are some of my results. The results were very light and I had to use preview to add some density. The expired film was also very grainy, to be honest I forgot it was monochrome 🙂

Once the second lockdown is lifted I might revisit this place. I think it will look even spookier in winter. But yes, it worked.

I love my new Kiev, not keen on the film. I have one more roll of that left. I am happy with my swap, I do wish my original one worked, but hey ho what can you do. Two happy Kiev owners and the possibility of one being resurrected to a new life…the camera not the owner.