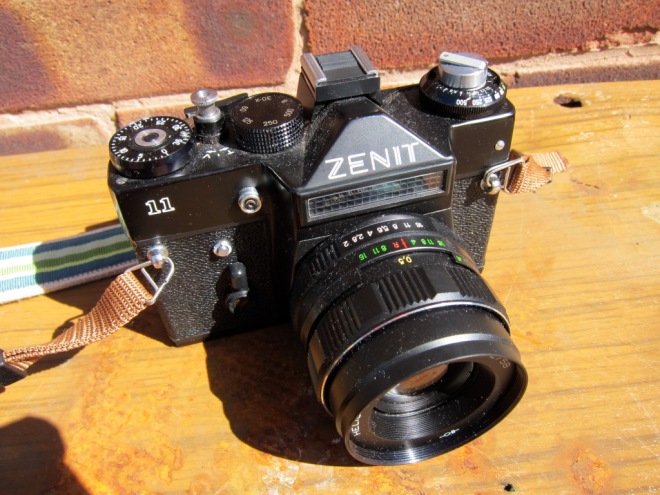 This post is absolutely ridiculous, or at least ironic in the Alanis Morrisette version of the word. I have already mentioned how this was the first camera I ever owned. Not this actual one of course, I used that example as part exchange for an Olympus OM-10 when I was about 19-ish. But as I am in a habit of searching for past cameras, I could not resist trying to get another Zenit 11. That feeling was further spurred on after reading this article…I wanted my godamn Zenit back! Hello eBay.

The Zenit 11 was produced from 1981-90. There really isn’t anything to say that can’t be gleaned from the photos above.

As you can see, my new one came with the Helios 58mm lens (like my old one). It is built like a tank and looks like one too. And way back in my youth that was the issue. I was young and had to buy a camera from a catalogue with my pocket money. It meant I could not buy a fancy pants camera with all the bells and whistles, just the cheapest in the book. When it arrived I loved it and took lots of photos of my pets and tried out the bulb feature, though only a few photos exist now. Here are some I took around the age of 15 or 16.

But being young, I was worried about what other people thought and quickly envied the fancier cameras. That meant my zenit ownership days were numbered. I am older now, somewhat wiser. What would that mean to my views on the Zenit 11?

Firstly, I no longer care what other people think, plus I have some fancy cameras so *thrrrrrr* (that’s my version of a raspberry).

Secondly, I appreciate the fact that this camera does not need batteries and will work even if the selenium cell is no longer working. It is a mechanical monster.

I loaded it up with a roll of fresh film and got to shooting around London….

Not content with one film and the wait to see the results. I actually used a roll of Oriental Seagull 100, which I found out was rebadged Kentmere. That was annoying to read as Kentmere is much cheaper, I will just get that next time. I pushed it to 400 and used it on the same trip to London. How nice to know I didn’t have to worry about batteries.

I found the camera a little stiff and shuddery when I pressed the shutter. There was such a clunk when I pressed the shutter, I felt there must be camera shake evident on the resulting photos. I don’t think my example had been used in a while as the shutter curtain seemed a little unreliable too when I watched it before I loaded the film. I was hoping using the camera would oil the cogs so to speak and I was right. There weren’t any issues with either rolls.

Focusing the Zenit was also a little awkward due to the focusing screen. I prefer a split screen as opposed to the shimmering of the microprism. On close up shots it was really hard for me to see when it was fully focused.

Anyway here are the results from the other film.

There are a couple of light leaks on the film. I am not sure where they came from as they are completely randomly places and go right across the film. There were non on the first roll, so I think it was down to me throwing it in a bag or something.

So has my opinion of the Zenit 11 changed changed?

Hell, yes! I absolutely love this camera and lens combination. The fact that it doesn’t need a battery is a bonus. It took me a while to get use to the 58mm focal length, I was constantly having to take steps back from the subject. I have the 35mm lens I got for the LTL, I will try that on this camera next. I might even look for a few more M42 lenses or a adaptall2 M42 adapter. What a cracking camera, I highly recommend it. Gosh if I can only go back in time and tell my younger self not to worry about what other people think and keep the Zenit, I would be so much richer…and this blog probably would not exist 🙂

This camera is going straight into the top five of my list.