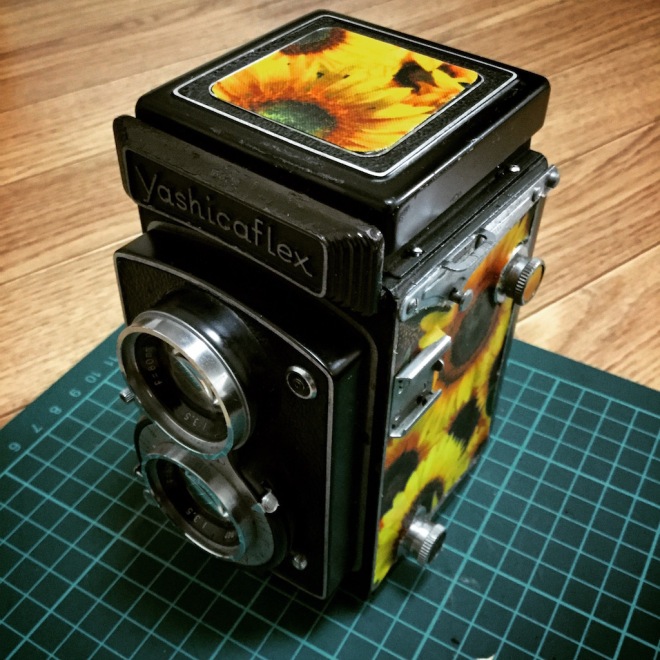 As you know I love Yashica cameras, the TLRs are usually out of my price range. I have never seen one in a junk bin…until now. Even then it was still $40, a bit of a risk considering its state. This one seemed to be the A2 version, there are many versions of the Yashicaflex. The A2 was released in 1956 and can be identified by the red window at the back. It has a Yashimar 80mm f3.5 lens with shutter speeds from 1 – 1/400 including B. The speed and aperture are set by levers on the lens, there is no meter, and the film is manually advanced by using the red film window. It takes 6×6 images.

When I picked this one up I realised the plate that pushes out the magnifier had been jammed over the focusing plate. That seemed like an easy fix, but did the rest of the camera function as it should. Was the lens clean? How was the actual focusing screen, was it damaged under the plate? How was the shutter?

First things first, removing the hood and yanking the plate into the right position.

I unscrewed the top off and then used a dentist hook and brute force. One of the screws disintegrated and the skin fell apart on touch. Once the top was off I could see the mirror and it was in a terrible state, you could barely see in it. If everything else did work I might be tempted to buy or learn how to make a replacement.

Ok, so once I put it all back together I super glued the plate in place permanently. As the spring was missing the plate would not stay up and made focusing impossible. It could also mean the same issue might happen again. I could get the magnifier out with my fingers, so no biggy.

Then I loaded a film and walked around my local area. Did it work? 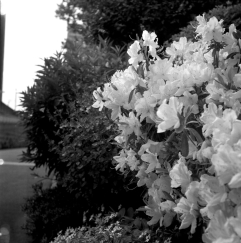 YES!!! Ok, I need to mix new chemicals, but the camera worked!! Gosh, the things this camera must have seen in its 60 years.

Ok so now for the skin. It is now my camera and I can do with it as I will….Sunflowers!

Keep or sell: Mine! It has sunflowers 🙂

4 thoughts on “Yashica Yashicaflex A2”