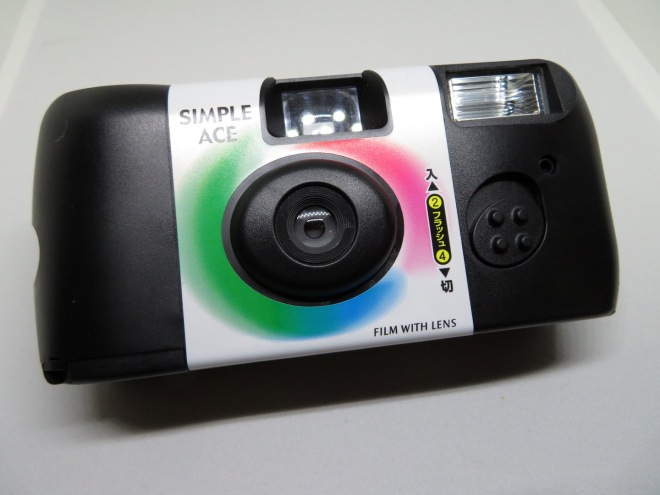 Posted on 2018-05-182019-09-19 by Peggy Posted in Swaps and searched for, Thoughts and MusingsTagged ace, camera, disposable, fujicolor, plastic, single-use

A couple of years ago there was a bit of a “thing” about this single use camera after a 30th-anniversary edition was released. I bought one and shoved it in my fridge and basically forgot about it. I didn’t use it as I was guilty about the single use plastic issue.

As you can see this one came with a cover, which I didn’t use. Recently I have seen a rubbery cover on sale too. Anyway, as for this style of camera – it seems ridiculous to me, given all the issues with plastic consumption. Plus there are literally thousands upon thousands of great film cameras around that cost the same as one of these. I tried another one I found in a junk bin, but this is the first time I have ever bought one and I felt guilty every time I used it. Lomography have released a semi-single use camera which is slightly better, but even they say reloading it is tricky.

While researching this camera I found this video of someone disassembling one. I was surprised by how much was really inside. I used to just take the batteries and throw them away when I worked in a developing lab.

I kept mine in my bag for a week and used it as and when, then used the one hour developing service at Kitamura.

Here are my shots.

I don’t think it did so bad. The weather was up and down while I shot during various times of the day, but the results were as good as some other point and shoots I have tried.

Still, I feel there is no real reason to produce these types of cameras anymore. It is a bit irresponsible.

Try buying film instead, use this link and I get some money too.
buy 35mm film here