While I was in England for the summer I bought a few cameras on eBay. I did not get a chance to try all of them. Not this one though. I tried this one the day after it arrived. There are a few reasons for this. Here is the long story behind the camera.

Firstly, I had no intentions of buying another camera this summer, but a gift box arrived with a few unexpected items inside. One was a Tamron 2 Adaptall mount for a Canon camera. To be honest I had no idea what this mount was used for, internet to the rescue. Hmm, a lens that would fit many cameras, hence the “adapt-all”. Unfortunately, I did not have one of these lenses, internet to the rescue again, or eBay to be precise.

The cheapest one I could find came with a Pentax K mount. Perfect, a different adapter ….you might see where this is going.

The lens arrives and I try to swap the mounts, but try as I might I could not get the Canon one on my AE1 or A1. I wish I had found that website before I gave up, but no. So now I have a lens and no camera. Hello again eBay. I won a bid on a great package. A Pentax ME Super with a 50mm lens, with a case and all the manuals. Awesome, the Tamron lens I had was a 28mm. The whole lot arrived within a few days…but…

I will not repeat the words I said at the time. The issue was the battery compartment, surprise surprise. It was completely stuck and probably had some corroded batteries inside. There was no evidence on the outside. I contacted the seller and he offered me a refund, but I said I would work on it first if he accepted there might be some scratches on it. He said, “Go for it.”

Thinking of the gentleman who gave me the original adapter, who once wrote..soak the whole thing in vinegar, I decided to JUST take off the bottom plate and soak that in vinegar overnight.

The plate came off easily and there were no attached wires, the batteries dropped right out.

There was very little damage inside the camera, but still, the compartment was stuck. Being in the UK, suffering from jetlag, and no Konbinis around, I opted for the malt kind of vinegar…good for chips, good for corrosion??
So I left it sitting overnight and tried it again in the morning.

But would the camera work after suffering from corroded batteries.

I was so proud of myself. Persistence is the key to success. So said Winston Churchill and Ray Kroc, plus a few million others.

And now finally, for the camera review. 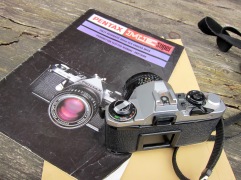 The ME Super was produced from 1979-84 and it is tiny. I added a shot of it next to a Yashica for comparison, I thought that was more appropriate than a banana. As you can see from the photos, it has everything you might need, auto, manual, shutter lock, Bulb, ASA control, exposure compensation, a film advance window, and a battery override of 1/125th. To set the manual speeds you use the two black buttons next to the shutter. The film winder action is smooth and fairly short. Inside the viewfinder is a scale which lets you know the intended shooting speed with a green light, or orange for an issue. There is an over and under red warning light, but it will still fire. Here are some more technical details.

I loaded it up and went for a walk around my home town/village. 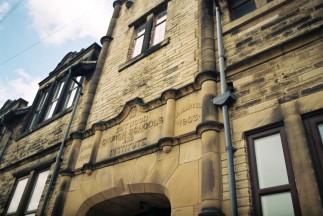 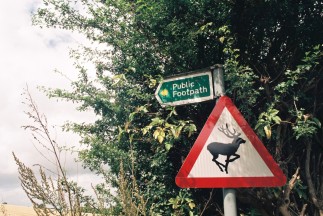 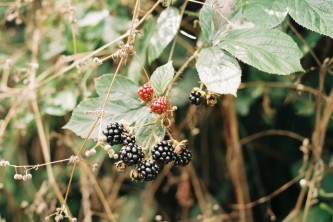 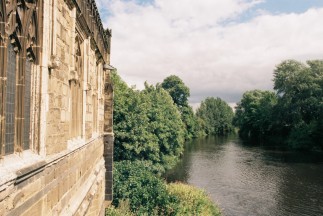 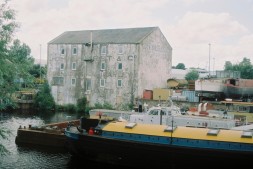 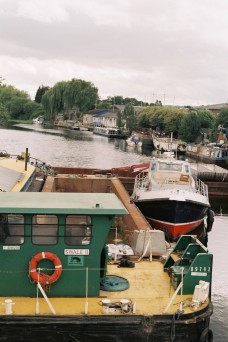 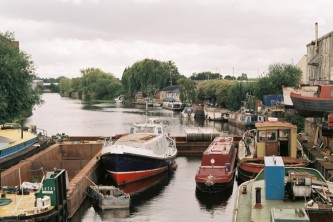 I love this camera! I also love the deer sign…you have as much chance of seeing a unicorn around there. Anyway, the camera is so light and easy to use. I love the Tamron Lens, it is a perfect addition to the 50mm. I loved it so much I brought it back to Japan with me, which was actually a bit dumb as I have a few here already. When I have it in the same country as the Canons I own I will try the adapter again.

Did you notice the two similar shots of the building? I tried seeing what would happen if I left the camera on the wrong setting, in this case over exposing by forgetting to adjust from being inside the Hepworth Museum….on purpose honest. It coped well.

Keep or Sell: The whole package is mine. When I put it with my other cameras here I realised I had a couple of other Pentaxes, the Spotmatic which I just fixed 🙂 And another, as yet untested one. Maybe I am switching my allegiance from Olympus or Yashica??

Plus a big thank you to my friend who sent the original adapter. Unfortunately, I don’t think he has a blog I can link to…he should get on that 😉

12 thoughts on “Pentax ME Super”