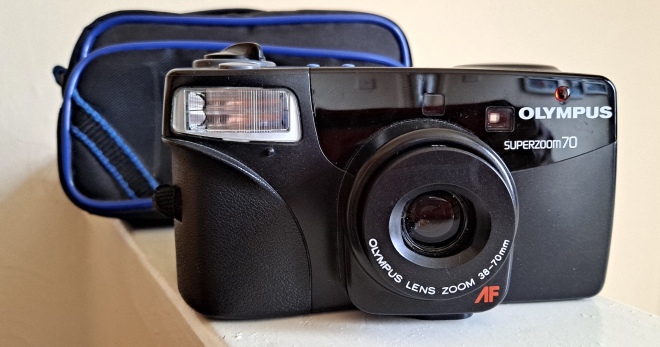 This camera from 1993 was a cheap charity shop purchase. I had a feeling I had tried an example before, but checking my camera post list didn’t reveal it. You can find all the technical details you require here and a manual here.

When I first started using film again…and obsessively trying cameras, Olympus was my number one love. They are still up there and I was happy to find this example. It is big and bulky, with a limited aperture selection of f4.5-7.8, but I liked it straight away. The zoom isn’t much to talk about and I ended up leaving it on 38mm for most of the shots. It is comfortable to hold despite the bulk. You can turn the flash off, but it resets once you turn it off and on again. Best of all you have a choice of battery options.

After trying another camera this one just felt reliable and I loaded the half-used film from that one into this one. I didn’t want to go to great effort finishing the film as I didn’t know how it was stored or its age. So I just left it in my bag while I lived my life. I ended up with photos of Boothtown, poppies for remembrance day, and a few from the lake district where I went on a sudden impulse.

The small factory in the first photo makes road studs or cat’s eyes which were invented near there.

I loved using the camera so much that I reloaded it with some expired Agfa 200 while I was at the Lake District.

It was such a beautiful day and a lovely walk. There were a few other people there, but not many. In fact, I saw more cyclists than walkers. I was supposed to do this walk, but the map I uploaded to my GPS wasn’t as good as the one in the link. As it was a spur of the moment walk, I wasn’t as prepared as I should have been and by the time I realised my mistake, it was too late to complete the walk safely. I love watching documentaries about mountain climbing and most mistakes seem to be made by people not turning back in time. So I listened to my inner voice and turned back before reaching the cairn. I will get there another time…in the spring when it is warmer, don’t be fooled by the sunshine.

I finished the film off on a trip to Norfolk to see some seals. No photos of seals on this film or camera, just a few of Great Yarmouth.

I do wish I had bought more Agfa film when it was available at Poundland, such lovely colours. What a great camera.

And if you have got all this way to the end, here are some digital photos of seals. I might have to sell a few cameras to get a better zoom lens for my D750. These were taken on an old Tamron 18-270mm not the best lens in the world, but better than a 70mm zoom on a point and shoot.