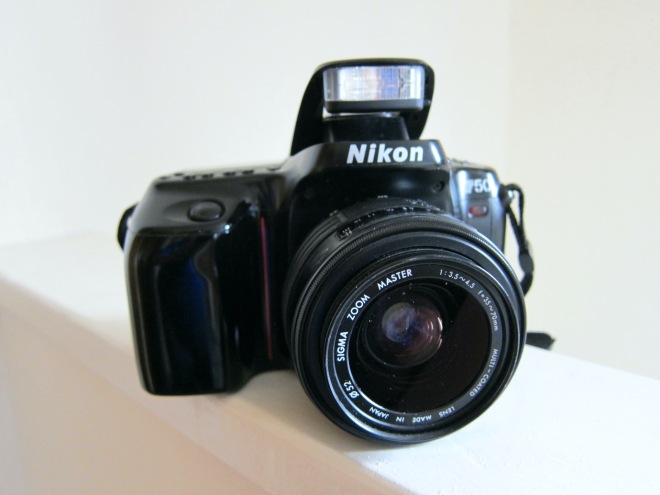 I had a broken/donor Praktica body that I decided to sell on eBay in case anyone needed parts or thought they could fix it. I set the price very low, 99p and it sold for that. About a week later I received a message from the buyer saying they had fixed it.

Hmph…all they used was WD40 and alcohol…double hmmmph. I wrote back and said well done and actually meant it. I mentioned my website, whereupon they found the contact form and we started a communication. In the end I said I would send them a couple of broken-ish cameras to see if they could fix them too. In return they sent me a couple of working cameras, this was one of them.

I tried a few lenses on the body, but the only one that would communicate was this sigma that was previously attached to a Nikon F90x.

This camera body from 1994 can be found quite cheaply in the usual places. It was the predecessor to the F60. It is quite heavy and the menu system is quite different from those two cameras. There is and advanced/simple switch, the simple being fully automatic.

The simple setting turns the camera into a point and shoot, fully automatic. Saying that, when you press the menu button you do get a choice of fully auto, landscape, portrait, and macro. Those selections let the camera know how to control the aperture etc but you still don’t have any control.

The advanced setting brings up the choices of PSAM, the P having a submenu of landscape, portrait, macro, sport, silhouette, night, and motion.

Inside the viewfinder the information changes too. On simple mode there was no information, just an indication of whether it was in focus and if a flash was needed. There is an inbuilt flash. On advanced there was more information depending on the setting chosen.

I loaded this one with a roll of Ilford FP4 that had been in another camera, there was still half a roll left. I took a few shots in the garden then at a local parade. At one time the lens stopped communicating with the camera, but I realised I had moved the aperture from the red 22 setting. I also found the camera struggled to focus at times, it searched. In the end I finished the roll and was pleased I had.

Here are the results.

This wasn’t my favourite Nikon. I didn’t really like the menu system and the weight of the camera was always going to be a negative. The lighter Canons, Pentax, or Minoltas of the same era are much more enjoyable to use in my opinion. This is the opposite opinion to Jim Grey who preferred it over those lighter cameras. I feel if I have to carry this weight, I might as well use the F90x.

Though of course I am aways grateful for a gifted/swapped camera.