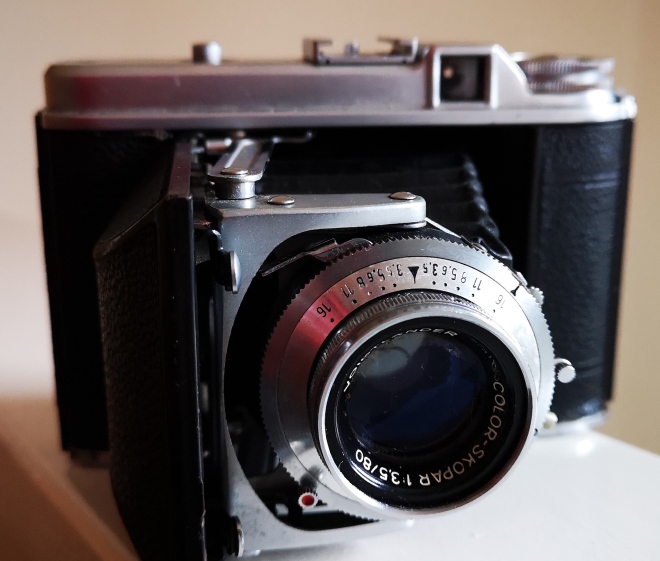 I was sent this camera, along with another Voigtlander by a friend of a friend. A few emails let me know the camera had not been used for a while as it belonged to the last owner’s father.

The shutter button was quite stiff when I first tried it. But a little clock oil in a few places and some actuations brought it back to life. I checked the bellows with a torch and that seemed light tight. Lucky me.

This camera was available between 1952-55. The last link says you might get 13 rather than the usual 12 photos due to the close spacing of the negatives. This was also mentioned to me by Mike Eckman who wrote this very detailed post about the camera. Unfortunately, the day I took the camera out for the first time it was just after a snow storm and very cold. It caused the camera to seize towards the end of the roll and three shots were over lapped.

As there was no rangefinder I left the camera on infinity for the most part, but I do have a portable rangefinder which I will attach at some point.

I love the shots I got on this walk. I haven’t take any film photos in the snow for a long time and I had a little difficulty working out the exposure, especially as it was also foggy for parts of the walk. It seemed to fool my phone light meter. I tried pointing it at the back of my hand but I am pastier that I thought. Here are the shots from a snowy walk.

I took the camera out again on another cold day and it was very stiff on that day too, almost seizing. I think I might get it serviced as I do like it. The lubricant used in vintage cameras has a tendency to go a bit more solid in colder weather.

For this outing I used Fomapan 100 and pushed it to 800 in processing, just to see what it would be like. As you can see it ended up quite contrasty. A couple of the shots overlapped, due to the stiffness of the film advance. So I am yet to really see if you can get 13 shots.

As for the camera, I have recently found a very reasonably priced place that services cameras. The other Voigtlander was sent there and came back much smoother. I do have another camera similar to this one, but well, you never know when I might drop one of them. 😉

NB: As I noticed a spelling error, I updated this post on my phone…and it lost half the text and photos. It seems, if you use two different platforms wordpress might revert to an older draft. All fixed on this post now I hope.