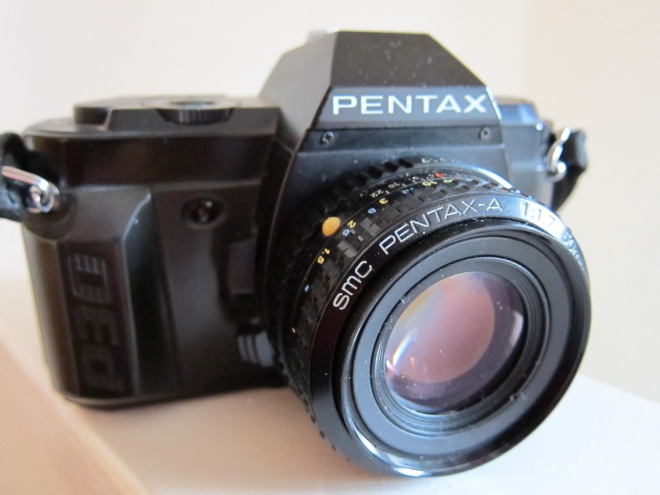 Someone asked if I was still making reviews. Well, I still have quite a few cameras on my shelf and can’t quite kick the addiction yet, but this is the last one in my draft folder. It is also the last of the P30 cameras, definitely my last of this series. I have already tried the other, very similar ones, namely the P30 and P30t. On looks alone, I prefer the P30t. On use, I don’t really have a preference. While trying this version I decided to try a film experiment of sorts.

According to this site the only real difference between the P30n and the P30t are the looks. On this website you can find all the technical details you might need for this 1988 camera and some personal stories about the camera.

As I said I decided to try an experiment with this camera. I already knew how the camera worked and how it felt, so this time I focused on the film. Recently I have been trying to process my own slide film, but it has been coming out a bit funky. I didn’t think I was doing anything wrong and it didn’t seem possible that I had the wrong chemicals, but the scans were coming out very psychedelic. A friend suggested I send one film away to be processed by someone else to see if the results were the same. I thought this was a good suggestion so I did. I loaded a roll and walked around my local area, it was a dull day so mostly the camera was set to F1.7 and 1/60th. I sent the film to John Salim Photographic, who did a great job. The film was expired, as is all my E6 film, but the film returned did look better than when I processed it myself. It was purple but not psycho. So then I got down to scanning it and…

Return of the psycho! What is it? Ok Occam’s Razor…simplest solution. It must be the way I am scanning them. I did some research and found this article. It basically said, turn off all colour correcting software as it is fooled quite easily. So I did that and scanned the film again.

So the colours are better, but they are not amazingly sharp. I do find that sharpness is an issue with the canonscan though. One day I will get a camera set up like explained in this video.

Anyway the camera worked well and I have solved my wild colour issue, though I have to say I do quite like it in certain circumstances. It works very well for grafitti.

Here are some more shots from the rest of the film. Note the little library is now much less psycho.

Basically, you can’t go wrong with a Pentax SLR.