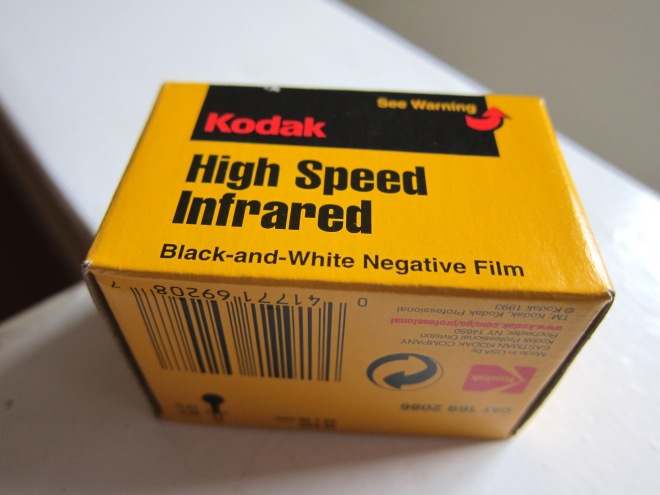 A while ago I was given some infrared film. It had expired, but had been kept in a freezer or a fridge since it was produced.

I read up on using it and checkout out some sample photos. Mainly I saw landscapes so decided that was my focus too. This website gives even more details on what to expect and how to use it. It also mentions that the felt on the opening of the cassette is not infrared tight so the warnings on the box and tub are important to follow.

DO NOT OPEN THE TUB OUT OF A DARK BAG. That means you have to load the camera inside the bag. The article also mentions a filter. So before I did anything I ordered an infrared filter on eBay. I got a cheap one as I only had one roll of film. You can use the film without a filter but what is the point of that, it would end up looking like a regular black and white film. I won’t go into lots of technical details, you can do the research too or read the blogs I have already linked to.

I decided to use my Minolta XG2 for the test for these reasons:
1. I knew it worked
2. The lens had an IR diamond on it.
3. The light meter was through the lens.

I set the camera to 100asa and attached the filter. Even though I could not see through the filter, the camera often chose a surprisingly shorter exposure than I expected. It was not short enough that I felt I could do without a tripod, so I took a mini tripod on a walk around Dewsbury Country Park. I only took a few shots as I decided to use some of the roll as a development test as I didn’t really know if it would work or if I could develop it.

Here are a few shots from that first test. I developed it in Ilfosol 3 for 10 minutes at 20 degrees.

To focus I removed the filter and reattached it carefully after. You have to turn the lens a little to the right as IR needs a different focus point than regular light. The other blogs will explain that more clearly. Anyway, the results were interesting. So I took the rest of the roll to another park, where the camera jammed due to a long exposure issue. I only managed a few more shots there before returning home to deal with the camera.

I fixed the camera with the method mentioned in this post. At this point I almost gave up on the film as it was a little awkward to use. The whole “keep in the dark” issue meant I could not just take out the film to look at the camera closely. But with only having one roll I persevered, but was looking forward to finishing it.

Once sorted I decided to finish the roll with a different filter to see what would happen. I chose a regular red one. Here are some results.

As you can see, especially with the path photo, you lose some of the IR effects with a red filter. The image is slightly sharper, but where is the fun in that.

I don’t think I will try this again with film though it was interesting.

Update: I converted a digital camera to take IR photos. You can read about that here.