I was strangely attracted by this camera even though it was far too heavy for me to keep forever. I have already tried a few similar Nikons recently, so this didn’t really seem like anything special. Plus it didn’t even have a lens, and I hate having a body without a lens, but buy it I did. I took this 1987ish camera to Yokohama and a new-to-me shop.

I think I was attracted to this camera by the dials, they look kind of funky. The plate on the top of the dials needs to be pushed down to in order to turn them. I think there used to be a button there instead of pushing the plate, but it is not there now.

The lens you can see is the one I bought in the junk section of the shop I mentioned. I attached it after buying. Before that point, I had another lens attached of course. You can see a photo of the shop front. That is the point where I changed the lenses. I don’t see any discernable difference, well-done junk lens.

Another feature I liked was the extra little window on the back. This had a barber shop like pole inside that turned when the film moved. Handy to see everything was moving correctly. Back to the dials, you can keep the top one on A (aperture) and the bottom on S (speed) for the camera to be fully automatic. Move one dial away from those mentioned and the camera becomes semi-automatic. Take them both away and the camera is fully manual. Easy peasy. By far the best feature is the battery choice, AA batteries. That means no matter where you are, you will probably find batteries for it.

And that is that. It is DX coded only, no exposure compensation unless you use the manual mode, nothing special really. You can read a great review here.

The only other thing I can mention is the weight. Oh, it is heavy, especially with the new lens. I think you really have to use two hands to keep it very steady. The shutter release is a bit sensitive, so you might accidentally take a shot while focusing. I did that on a couple of shots, can you see which ones?

Is the weight worth is? Are the shots exposed well enough that you will put up with the weight? Yes, I think so, look. 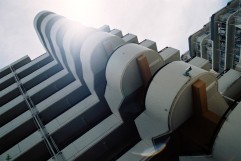 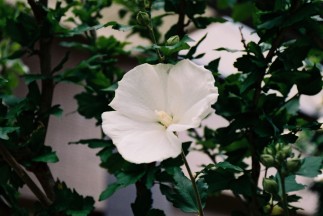 Not bad at all.

Keep or Sell: I have already said I have no intention of keeping it. In fact, I have already promised it to a friend, if she wants it. She might actually choose another, lighter, but not as good camera.