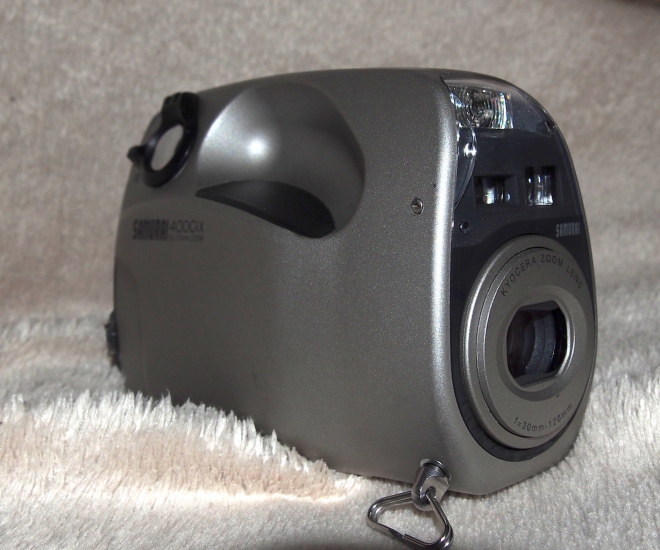 I was so excited when I saw this camera that I missed the all important APS symbol on the back. My rule is never to buy an APS camera as the films are no longer manufactured and therefore can only be bought on eBay for a song. But I wanted another, working samurai camera. I thought it would be like the other one, a half frame. But no, an APS it was. So I coughed up and bought 2 films. One for me and one for the lucky person who might buy it from me. APS film was introduced in 1996 and ceased being produced in 2011, just a 15 year life span as apposed to the 90 years of 35mm which is still in production.

This camera is from 1998 and has a 30-120 zoom lens. It worked perfectly. No focusing issues like the last Samurai I owned. It is a basic point and shoot camera with the 3 settings that were common to all APS cameras.

It is comfortable to hold and use, palm sized and light. I put it in my pocket and cycled to a shrine a fair distance away. Two birds with one stone. Getting out and about and testing a camera.

Getting the film developed was easier than I thought, Yodobashi Camera processed it the same day. When I went to pick it up the store clerk smiled at me when I approached and said pretty APS lady. He meant the  pictures not me 😦 and remarked the colours on the index print were pretty and said for an old film it was very good. He was right.

I wish the film wasn’t so hard to get hold of as I really liked using this camera and am very impressed by the quality of the shots. All sharp, colours great. I did use the different settings, but when the film was scanned the whole frame was used.